Cr Peter Brown has suggested recently using the undeveloped south-side of the railway as a gateway park. This is exactly the area that's visible in this site's banner: 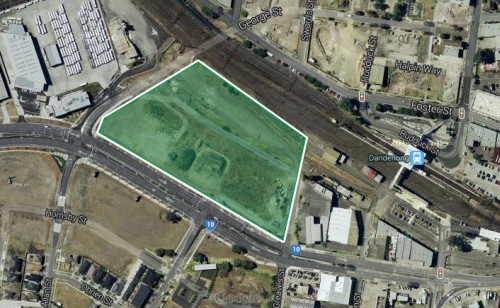 The area in question

I feel that this idea is far too raw at this stage, but it's not without merit. So let's try and bake the idea a bit more here and tease out some more of its implications. (If Cr Brown has already done this kind of thinking, I'd be happy to point to it if I'm informed of where it is.)

The land has been idle for at least 10 years, and no doubt that's because development of the city has crawled along, as well as there being an abundance of other land available. It spans roughly 3.1 ha, which is just shy of half of the redevelopment area to the north of the station. Places Victoria sees developments ranging from 4-10 storeys in this area, interspersed with open space. Let's call this vision the development option, versus Cr Brown's park option.

There's several positives for the city associated with the development option. Possibly the most widely accepted point regarding higher density development is that it works best when located close to public transport. There are few places that meet this criteria better. In this case, locating development near the station has the potential to increase density without contributing to road traffic nearly as much as developments further away. Such developments can also slow (but not stop) the rate at which less central developments occur, allowing residents more time to adapt.

The development option has the potential to activate Cheltenham Road and in turn expand the city's offerings, particularly to people to the south of the city. Assuming the offerings are right, people in Metro Village will be much more likely to take the option of walking to shops on this side of the railway rather than to the north side. One would also expect development here to catalyse further developments to the east (i.e. south of the station and in Precinct F). Overall, development here provides significant benefits that would be lost in its absence, so any alternative must be well justified.

The park option, of course, mutually excludes the development option. More than that though, parks tend to be permanent, and thus this will likely prevent development from ever occurring here. Conversely, though, it's often extremely difficult to find suitable central land that can be made into a park, so this presents a rare opportunity to reserve such space.

Dandenong doesn't have a critical need for more open space (though more of it wouldn't hurt, of course). For instance, within a few kilometres of this location, we have Greaves Reserve, a substantial linear park that follows the creek (that we could utilise significantly better than we currently do), new spaces in Meridian and Logis, as well as Hemmings Park. Metro Village also has smaller parks and open space within its boundaries.

Dandenong also has an existing city park (along the creek trail), which acts like a gateway park for those coming from Casey. Adding another city park may prove more of a burden than the council can handle — progress on the 2007 Dandenong Park Precinct Master Plan has not been very encouraging, as only a small amount of that plan has been implemented after 7 years. Another major park would split the already small funding available.

I find city parks tend to work best when they are highly permeable and provide access from all sides, as that allows people to stroll through them and gives them a city park feel. Unfortunately, the proposed park has only one accessible side, along Cheltenham Road. Good design here can mitigate this issue — for instance, if a small strip of land near the bridge is reserved for some small developments (either small offices or retail) that overlook the park, this would prevent a dead left edge. (Indeed, there is a significant risk that if this isn't done, undesirable activity could end up attracted to this isolated nook.) A key element of the park design should also be a central trail from the corner of Cheltenham Road and George Street to the station, which would substantially improve permeability. It would also provide a very attractive walk towards the CBD.

Which brings me to the primary advantage of a park here in the present — it would be visually compelling. With the (slowly growing) CBD in the background, the park would provide a very appealing foreground as people drive in from the west. The loss of development land so close to the station would create a missed opportunity in the short-term so severe that it cannot be overstated. However, over the long-term, the CBD can (and should) expand west towards Bennet Street and Eastlink, which will eventually eliminate this issue. It is only then that it would stop being a mere aesthetic extravagance and would transform into a central park, providing a space to the surrounding resident and worker population for leisure, events and relaxed meetings. Until the CBD expands, however, it is simply too far away from where everyone works and lives.

So I believe a well-designed park here is a good idea, but we need to accept that it will only provide real benefits to the city in a future that may be many decades away.